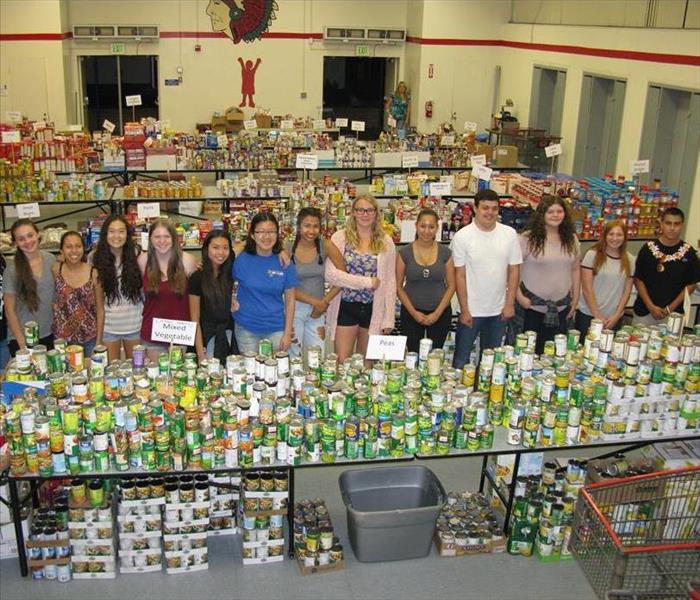 This November, SERVPRO Glendora/San Dimas & Irwindale/Baldwin Park will go to the Williams Education Center cafeteria to assist the Glendora Community Coordinating Council (GCCC) in the sorting of canned food for their Annual Holiday Food Basket Program.

The GCCC began collecting food late September by placing collection boxes around the Glendora area at locations such as the Glendora Public Library, Glendora High Scholl, and Glendora Police Department. They also connected with institutions who have participated in past years to make donations.

The food is then taken to Williams Education Center where the sorting took place.  The SERVPRO team will help sort cans of vegetables, beans, corn, canned fruit, and other non-perishable items, moving them from overflowing boxes and bags into organized and categorized groups on the cafeteria tables. Once sorted, another team of volunteers will came through with packing lists and assembled boxes. Each box gets a variety of food items in addition to food vouchers.

One key purpose of the GCCC is “to mobilize a voluntary association of community organizations to support it’s citizens.” SERVPRO has been able to utilize our employees and equipment resources to aid the GCCC on several occasions.

Mr. Greg Gillham is the lead coordinator for the event, fostering the relationship between SERVPRO and GCCC. He is a retired electrician working with GCCC, Kiwanis Club, and other local charitable organizations.

Last year, SERVPRO aided GCCC in completing approximately 250 food boxes that will be distributed to needy families in the Glendora community during the Holiday Season. GCCC will also deliver part of the food collected to the Shepard’s Pantry in Glendora.