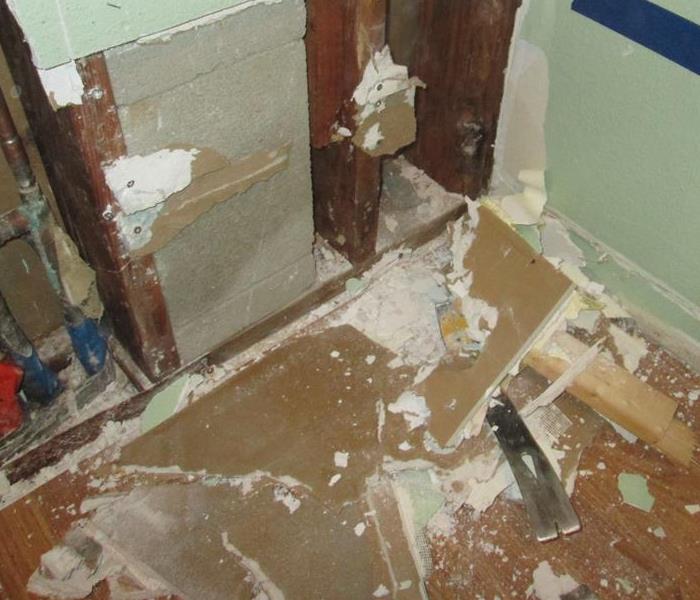 It’s June 10th, around 3:30pm, and SERVPRO of Glendora/ San Dimas responds to a call from a resident in the Diamond Bar area located in the Eastern Los Angeles County. There was a request for residential restoration for a two story home. The homeowner has experienced water damage coming from a pipe leak in the laundry room. Project manager, Drew Weaver, Crew Chief Pete Fregoso, Technician Brandon Gibons, and Technician Jose Muro, arrived at the site within 30 minutes of the call. SERVPRO of Glendora/San Dimas crew members stack their box truck full of drying equipment and by 4pm the crew begins inspection.

The pipe leak, located in the wall of the laundry room, is causing damage not only in the laundry room, but also the family room. After inspecting the walls and floors with a tramex moisture encounter plus and a fluke thermal camera. The crew began removing the affected wet material and began the restoration process.

SERVPRO of Glendora/San Dimas teamed up with a nearby Plumbing Service in order to stop the water leak. SERVPRO restoration and cleanup crew removes the laminate flooring from the areas that were affected by the water damage. After the removal, the drying process begins. SERVPRO’s equipment, which included one dehumidifier and three fans were left behind to dry out the moisture in the floor and walls.

By Wednesday the site was completely dried from the water damage! The crew from SERVPRO Glendora/San Dimas performed a swift and effective cleanup. “Like it never even happened.”