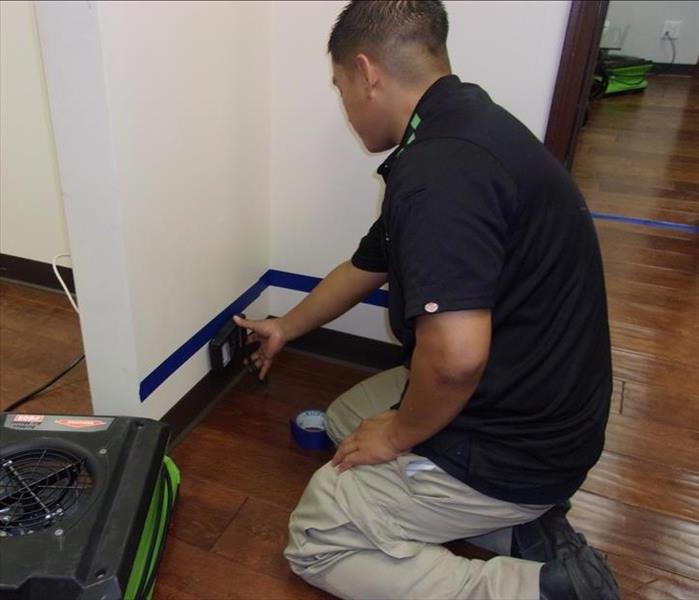 Danny checking for moisture in the walls

It’s 8:30 am, morning of June 1st, SERVPRO of Glendora/ San Dimas receives a call from progressive orthopedic solutions requesting the crew to come restore the office from water damage due to a toilet leak in the upstairs women’s restroom. A plumber has been hired to stop the leak until SERVPRO crew members arrive. Project Manager Drew Weaver, Estimator Justin Calorino, technician’s Pete Fregoso (Crew Chief), Danny Guzman (Crew Chief), Brandon Gibons (Technician), and Jose Muro (Technician) arrive on site, with equipment in hand within 2.5 hours. By 11am, equipment has been set up and the restoration process begins.

The crew inspects the damage and concludes that the coffee area, two storage rooms, the hallway, the downstairs hallway, and the men’s restroom have been affected by the leak. In order to restore the facility, the team first extracts the excess water. Next, the crew begins to remove sagging ceiling tiles to prevent more ceiling tiles from collapsing.

SERVPRO crew left four dehumidifiers and 16 fans to dry out the structure to ensure the commercial building would be as good as new. The job was completed by June 8th.

Thanks to Drew, Justin and the technicians of SERVPRO of Glendora/San Dimas, Progressive Orthopedic Solutions’ commercial building received quality service for the water damage. In the end, it was "Like it never even happened!"